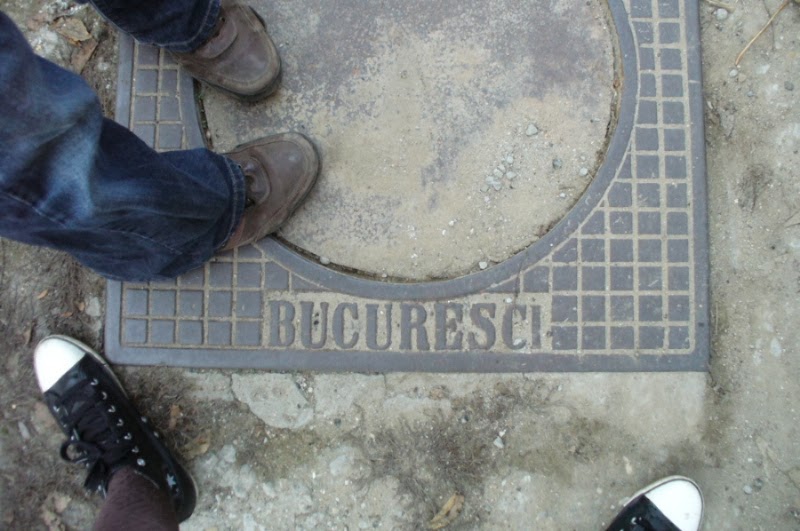 Dogville at last, and what a blow. Maybe it’s better to write a comment after 6 years from the release of the film, because there are more averted readers in the public and therefore the opinions can be shared without a preliminary description of the plot, set and characters.

The set the film is famous for, beside other merits, is analytic, with the houses and landmarks drawn on the floor or written next to the objects. Things have either a basic definition, such as door and medicine box for the doctor’s house, a few scaffolding for the mine shaft, or a textual definition, such as Old Lady’s Bench, Elm Street. This choice is leaving room for the imagination and readily reminds a theatre representation. There is difference though between theater and film, the later being suggested, as a commentator on imdb.com remarked, by the quick cut frames, a tribute to Godard and a reminder of the typical film flow of the narrative, made up of pieces mounted together and not one trait of life, as in a live theatre representation.
In the end I realized that even if the film was made on a real set, as a “normal” film, the viewer would have retained the same details – some pieces of furniture, the light through the windows, Nicole Kidman’s eyes.

One day, in a remote village from Colorado, a girl named Grace arrives and changes the lives of the entire community. Divine Grace is apparently trying to escape some gangsters, who later are searching for her, while the locals are hiding the fugitive. The price Grace has to pay for protection sought from Dogville is rising day by day, as the danger is rising as well. Grace is so kind, she is not human. Every misery from the part of the citizens, from the injustice of the women to rape and abuse could break her, but she is enduring all with stoicism.
Al this scenario can be interpreted as a metaphor. Dogville is the humanity and Grace is the Christian God’s son. The entire plot reveals its allegory only in the end, when the gangsters called by the traitor Tom Edison to be delivered Grace turn out to be her father and his bodyguards.
Jesus is all too kind and his mercy has no limits. But his Father is the God of the revenge. Eye for eye and tooth for tooth, the opponents are crashed. His Son came to bring the new Law, to “make the world a better place”, as Grace at one moment wants to achieve with the power accepted from her father. But as she hesitates between staying in Dogville and rejoining her father in the gangster’s merciless world, the light changes. The moon is rising and shading light on nature and people, and all their wrongs done cannot be forgiven. “They could do more” reckons Grace, and they didn’t. They were only human, and the human nature is so low and Grace might have done the same in their situation, she herself being a human. But the contract was broken, they had a chance and they didn’t do anything.

Many commentators debate Tom’s punishment in the end, and if he deserved to die. He was good with Grace; he tried to help her and took her side in front of the community. It is true, he didn’t do anything when she was abused and his plans were all wretched. His love is questionable. Why did he deserve the worst, to be killed by Grace itself?
The answer might be the symbol Tom is standing for, that of the intellectual, the moralist, the one who pretended to love God’s son, played by Grace in the metaphor. Because God is tougher with those he loves more. One pretends more from where there is more– “those who have will be given and it will be taken from those who don’t have”. His love was all theoretical, and he was not sincere. He proved to have back-thoughts, by keeping the visit card received from the gangster and not destroying it as he promised to Grace. If I don’t go too far, it was him who demanded Grace and waiting for “a gift” to convince the others, maybe to manipulate them. God invented by the moralist.

The punishment of the entire population is shocking and questionable. Even the children are shut. But this is only the normal way expected in the Judgment Day. I see here the malicious revenge of Lars von Trier, against the expectations of the viewers, who might have thought that Grace will forgive again.

Grace is very badly treated by the Dogville population, but what is forgotten is that at the beginning they didn’t expect her and when she asks if they need any help with their lives, as she was ready to help them in exchange for their hospitality, their answer is negative.

After all, people’s needs are not necessary moral. Chuck is frustrated and his wife is frigid, Ben is alone and is going to the whorehouse, Jason wants to be hit. Humans are not good and when they are, it is due to fear – for the police, for the community. Grace is not protected, as she is not a citizen. Her only protection could be people’s goodness and gratitude. But goodness doesn’t buy goodness, as it turns out in the final. When they gather in the town’s meeting hall to decide if Grace is allowed to stay with the community, she remarks in fact that they might or might not trust her. Why would they trust her? Mrs. Henson is reluctant to hide the fugitive and is mentioning the need to respect the law, especially when announces for police searching Grace are posted in the town. She seems mean, but in fact she had a reason. Moral against pity. The debates touched by this film and its interpretations are endless. That’s why Dogville is a chef d’oeuvre.
Publicat de Raluca la 13:29